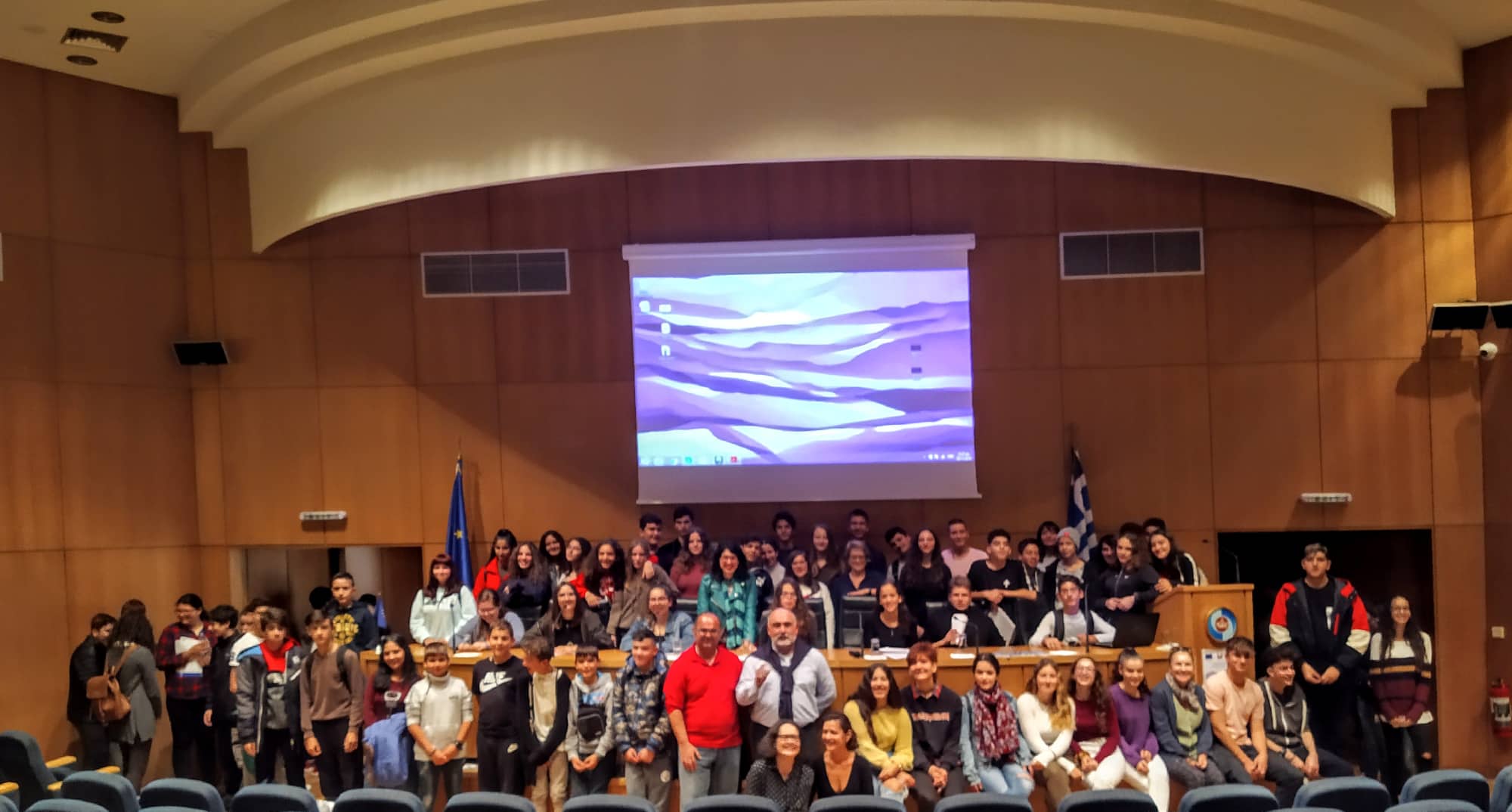 On Friday 29 November 2019, the Music School of Heraklion, in the context of the ERASMUS+ project KA201 R-EU-Connected, arranged a Decoders Event. It took place at the auditorium Kastellaki in the Chamber of Commerce, in the centre of the town. It started at 10.00 and finished at 13.00.

The event had been announced through the website of the school. All the primary and secondary schools of the Region, as well as representatives from the offices of Primary and Secondary Education, of the Municipality and of the Region, of the local media were invited.

For the realisation of this event, the Music School of Heraklion cooperated with the Highschool of Malia. In both schools, students have implemented in the classroom different activities, that are proposed by the R-EU-Connected project. More specifically, three sections of the third class of high school (age 15 years old) in the Music School were involved with the activity described as ‘The desert island’ and one section of the second class of lyceum (age 17 years old) in the same school, with the activity ‘Fast Fashion’. Two sections of the second class (age 14 years old) and two sections of the third class (age 15 years old) in Malia high school were involved with the activity of learning the Ode of Joy and writing new lyrics on Beethoven’s music. All the three activities were presented by the students and the responsible teachers, during the Decoders event.

The event started with a presentation of the project activities and results, by the responsible of the Music School. After that, four speakers followed. The first speaker was Mr. Moraitakis, the Responsible of Europe Direct in Crete. That day he was in Thessaloniki, so we had a skype session with him, that excited the kids. Apart his short presentation of the Institutions of EU, he also answered on questions that they had prepared, so they had the opportunity to try a stimulation of the European Citizens’ Initiatives. The second speaker was Mrs. Dourou, Academic Responsible of the International and Public Relations Office of the New Mediterranean University and she spoke about the opportunities that students have as European citizens to travel all around Europe for studies and for work. The third speaker was Mrs. Vouraki, responsible of the European Projects in the Secondary Education in the Region of Crete. She presented the values of the EU that are promoted through the European projects and encouraged the students to participate in them. The fourth speaker was Mr. Nikolakakis, philosophy, sociology and anthropology teacher in the University of Crete. He gave to the students some new ways to think about being citizens of EU, how and why this idea started, what does this mean today and how they can use it in the future for their own good and for the good of the humanity and the planet. How to realise this identity and what are the responsibilities and opportunities that result form it.

All the participants were very satisfied from the Event. The students of each school had the opportunity to interact with the speakers and with the students of the other. They presented their work, they expressed their questions and learned new things or new aspects of things they already knew.